My Teachers Gave me a Voice: Sandra’s ESOL Story 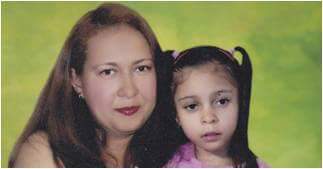 Sandra Hernandez stood in her daughter’s hospital room, listening to the doctor speak in English. His serious expression indicated something of importance, but to Hernandez the words were nothing more than unfamiliar sounds. A translator stepped in to help bridge the gap, but still, Hernandez felt uneasy having anyone speaking for her. It was in this moment that Herandez felt a motivation rise within her: no matter how long it took––she would become fluent in English.

It is a goal she has been working toward since she first started taking classes in 2017 at Catholic Charities’ English Language Learning Academy (ELLA) in Lynn, MA––only one year after moving from the Dominican Republic.

Now 51, Hernandez said she moved to the U.S seeking medical treatment for her daughter, who was born with autism, cerebral palsy, and a potentially life-threatening form of epilepsy. Only after arriving, however, did she realize the magnitude of the language barrier—how it affected not only her ability to converse with others but her ability to advocate for herself and her daughter.

When asked about the teachers she has worked with at Catholic Charities, however, including Patricia Buckley, Patricia Kennedy, and Linda Roemer, a radiant smile spreads across Hernandez’s face.

“I admire all my teachers, and I would like to be able to do what they do someday, giving their own time and knowledge to help other people,” she said. “If the world had more people like them, it would be a better place for everyone.”

Hernandez recalled a day in class a couple years ago that Kennedy asked the class to pair up and act out scenes from the assigned readings.

“We all had so much fun trying to act using our voices and our gestures to express the different situations we were reading,” she said. “Our English teachers have been very resourceful in helping us to express ourselves in English.”

Kennedy said her favorite aspect of her job is working with dedicated students like Hernandez and witnessing their confidence grow each day.

“Sandra is very kind and a fierce advocate for her daughter,” Kennedy said. “She kindly attributes her success navigating the hospital system and helping her daughter get the right treatments to her English classes and teachers, but we know she deserves all the credit.”

Hernandez says she someday hopes to work in the technology industry, having studied computer science and information systems before coming to the U.S.

“Thank you to all my teachers and to Catholic Charities because they give me a voice to speak to the world,” she said. “My English is not great yet, but I will improve over time.”

A post shared by Catholic Charities of Boston (@charitiesboston)