A Chance to Begin Again 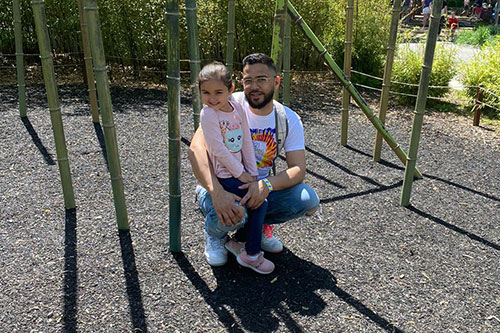 In Honor of Father’s Day, We Reflect on How Catholic Charities Helped Orlando Fontanez Become the Father His Daughter Needed

Stepping off a plane at Boston Logan Airport, moments after returning home from a trip, Orlando Fontanez’s phone began to buzz with text and voicemail notifications. One was from the mother of his then three-year-old daughter Najla. The other was from the Department of Children and Families.

Both conveyed the same nerve-racking news––Najla had been removed from her mother’s custody and taken into foster care overnight.

At the time, Fontanez was recently unemployed and living in a single bedroom unit in Framingham, which maintained a strict one occupant per room policy. Even if the building had allowed for an additional person, Fontanez knew the living conditions were unsafe for a child. In order to obtain guardianship and fight for custody of Najla, he needed to find housing––fast.

“I was completely lost,” he said. “I had many nights where I couldn’t sleep.”

Unsure where to turn, Fontanez picked up the phone and dialed his former foster parents, who had raised him in Boston through kindergarten and first grade. They immediately agreed to let him stay temporarily until he had Najla back and could figure out his next step.

Within a week, the Department of Children and Families granted Fontanez permission to take Najla.

Looking back, Fontanez believes this was a defining moment in his life. “Something just clicked in me,” he said. “Suddenly, I had someone looking up to me, depending on me to take care of her and make sure that all her needs are met. I knew I needed to step up.”

For Fontanez, family has always been complicated. After spending his early childhood with his biological mother and then briefly with his foster parents, Fontanez was adopted by his aunt at age 10 and spent the next fourteen years of his life in Puerto Rico.

It was during this time, spending many days isolated in his bedroom, that Fontanez said he gradually developed the notion that he was unwanted.

“There were some dark times where I felt alone in the world,” said Fontanez. “I felt worthless, like a burden.”

Just before gaining custody of Najla, Fontanez visited Puerto Rico to address these issues with his aunt, which he said have troubled him through his adult life.

“That conversation wasn’t easy, but it was necessary for me to heal,” he said. “There’s love between us now. Now, we both can go forward.”

Today, after a three-month trial period and several months of working with the Department of Transitional Assistance, Fontanez has full custody of Najla and is living with her at Catholic Charities St. Ambrose Family Shelter.

“They really treat you like family there,” said Fontanez. “I feel like I’m somebody’s son or brother.”

This sense of family is nurtured by the staff’s everyday gestures of kindness. When Fontanez moved in, Richard Freitas, Director of St. Ambrose Family Shelter, went shopping for him, bringing Fontanez new shoes and professional attire to wear during school and job interviews.

Now a student in an online computer coding course through Per Scolas Boston, Fontanez spends much of his time studying or catching up on other tasks. St. Ambrose’s staff often offer to watch over Najla while he does so, accompanying her to the shelter’s play space or letting her explore the shelter’s vibrant communal garden.

Beyond this, Fontanez said he is grateful to the shelter’s housing manager, who led him through the process of seeking permanent housing. At the moment, Fontanez is on a waitlist to find out if he will receive an apartment.

“Above all, the most we’ve done for him is given him positive reinforcement,” said Freitas. “He is pretty self-motivated, but to let someone know you believe in them, that’s really the best thing you can do for a person.”

Fontanez said he hopes the computer coding course, which runs five days a week for four months, will propel him onto a career path in game development. Growing up, Fontanez says video games provided him with a temporary escape from the challenges of reality and the difficult emotions he was often carrying.

These days, however, Fontanez does not want to escape reality anymore; Najla is now his reality––one he is grateful to wake up to every morning.

With Fontanez’s new goals come newfound challenges—he balances multiple hours of homework every night with caring for his daughter and seeking permanent housing. This time, though, he knows his worth and his potential; he finds it in his role as a father, as a mentor, as a protector.

“I’m really determined to learn and to complete this program,” he said. “Whenever I feel my motivation slipping, I always think about my daughter.”

“She is always asking me, ‘what is this?’ and ‘why is that?’” he said. “The things that adults are bored of or think we already know—she is still fascinated by.”

For Najla, the world remains undefined––every day is a fresh canvas and therefore full of possibility. Every moment is an invitation to grow. Every person is a potential friend.

“I need to view life as she views life, beginning today,” said Fontanez.

And so, they go forward together, side by side as father and daughter, each morning a chance to begin again.