Giving Back to his Teachers: Gerald’s ESOL Story 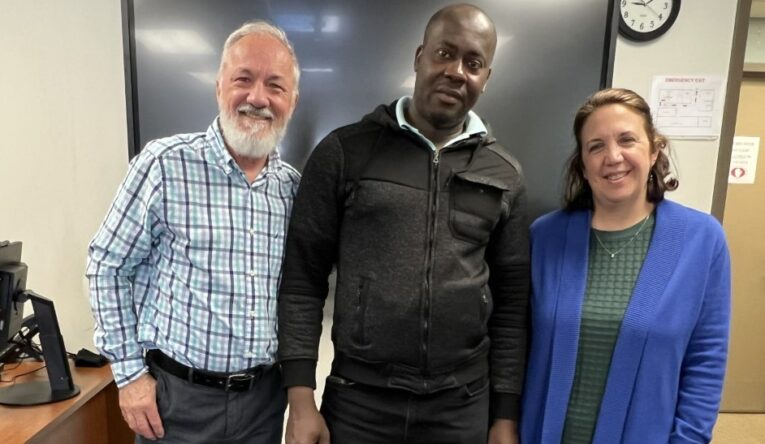 Part 2 of our Teacher Appreciation Series. We celebrate the positive and powerful impact Catholic Charities’ teachers have, in the classroom and beyond.

Originally from Haiti, Gerald Bazelais came to the U.S in 2014 seeking work and a better life. Now 45, he says he is always on the go, as he juggles three day jobs—working at a Costco tire shop, as an Uber driver and for Lyft. In his limited free time, Bazelais works on building up a small retail business on Shopify to support his family.

“When I first came to the country, speaking English was my first priority, because if you can’t really speak, you can do almost nothing,” said Bazelais. “Catholic Charities was the only place I could go and talk to people and have some relationships. It’s a great memory for me.”

Cheri Shaw, Program Director of the English Transcultural Center, said she got to know Bazelais well when he was taking classes at Catholic Charities. Though he wasn’t one of her students, Shaw said she always made an effort to swing by all the classrooms, asking the students how their day was and if they needed anything. Over the years, this simple ritual led Shaw to forge strong lasting connections with the students.

“I always shared a lot about myself and my family and kids, and I think it just kind of created a bond and a personal connection with all of them,” she said. “To me, that’s the heart of our program—teachers connecting with students.”

Though Shaw studied Elementary Education in college and had worked as a teacher for many years, she had no formal experience teaching English or working with adult students before joining Catholic Charities. After accepting a job at the English Transcultural Center, Shaw shadowed one of their ESOL classes, held in a church basement.

“I was sitting there observing, and I was just petrified,” she said, chuckling at the memory.

“As soon as I started teaching English though,” she continued, “that was it. There was no going back. I thought to myself, ‘this is what I’m meant to do.’”

In the years that followed, Shaw went on to teach a variety of classes, sometimes early in the morning and sometimes late at night, often travelling to meet students where they were, whether it be a senior center, an apartment complex or a church basement.

Shaw’s unwavering dedication to her students, both inside and outside the classroom, demonstrates the passion that drives Catholic Charities Boston’s education programs.

Above all, Shaw said the most rewarding aspect of her job is witnessing students like Bazelais succeed. She said just last month, he showed up to the front desk of the English Transcultural Center, asking to speak with her. After catching up for several minutes, Bazelais quietly told Shaw he would like to make a donation to the ESOL center to thank all of his teachers for their constant support. Shaw said she was stunned by this unnecessary act of kindness and by the humble manner in which Bazelais went about it.

“It felt really good for me to share that small portion of success with them and show them my appreciation for accepting me from that very first day I came,” he said.