‘He Has a Heart of Gold:’ Paul Brown is the Unofficial Saint of Catholic Charities’ Elder Outreach Program in South Boston 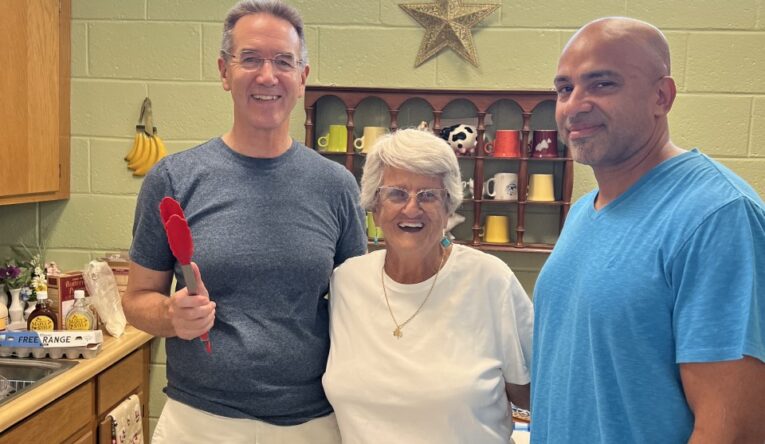 This is part one of a two-part series highlighting the unsung heroes driving Catholic Charities Boston’s elder support programs. Learn more about the Elder Outreach Programs in South Boston and Plymouth County or the Companions to the Aging Program in Lynn here.

Rita Martin, 62, showed up to the Monsignor Powers Elderly Apartments in South Boston with only the clothes on her back. She had been driven out of her last apartment after a pipe burst and flooded the building. With no renter’s insurance, she lost everything.

Weeks later, Martin was unexpectedly diagnosed with bladder cancer, leading to multiple blood transfusions and surgeries in the year that followed.

After recovering in the hospital, Martin returned home, exhausted, a bit dazed, and startled when she noticed a whole new bedroom set, with clean sheets and pillows, in her apartment.

“I thought I walked into the wrong unit,” she said. “Or was hallucinating.” Moments later, it dawned on her: Paul Brown, Elder Service Coordinator for Boston Housing Authority, had helped furnish her apartment while she was gone. “This man doesn’t know me and here he is going out of his way to help me,” she said. “He has a heart of gold and the patience of a saint.”

Brown has provided services to three elderly-disabled communities in South Boston, including Monsignor Powers, for the past four years. Responsibilities include ensuring everyone has the groceries, medication, and basic items they need each week, organizing flu, dental, and COVID vaccine clinics, and helping residents apply for SNAP benefits.

“When Paul joined us, he took the bull by the horns and made sure everything got done,” said Gerri Cummins, who has lived in the Foley Apartments for 18 years and now serves on the task force. “He is a very thoughtful and thorough man.”

That thoughtfulness shows in the events that Brown organizes out of the goodness of his heart for residents–a stress-reducing event with massage therapists, a partnership with the Boston Public Library to provide each resident with a free Chromebook and complimentary training on how to use it.

“I’m a very practical person,” said Brown. “I like the challenge of addressing problems. I also like the feeling of getting to know people in a family atmosphere.”

A key aspect of this family atmosphere is the homemade waffles Brown makes during the community breakfast he organizes each month for each building. One Saturday a month, he can be spotted whisking flour and eggs, flipping one perfectly golden waffle after another onto the trays served to the residents, along with fruit, sausages, and freshly brewed coffee.

“He has brought everyone together, which is something I’ve been trying to do for a while,” said Cummins. “It’s just perfect. We couldn’t ask for anyone better.”