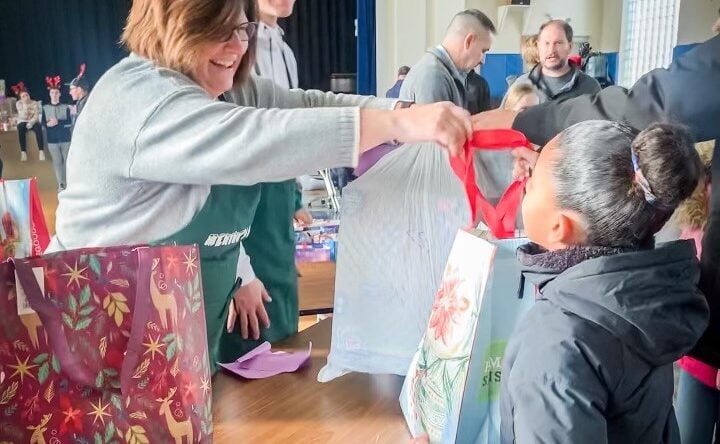 For the 29th year in a row, Catholic Charities Boston partnered with the late Mayor Thomas Menino’s family to host an annual Christmas Eve toy drive at the Teen Center, once again serving over 300 families in the Bowdoin-Geneva community.

Beginning in 1993, Mayor Menino would bring gifts to the Teen Center to brighten the children’s holiday; since then, his tradition has evolved into a community-wide event that represents the Teen Center’s commitment to treating each of its members like family.

“Our Dad loved this city and all its neighborhoods and people. He especially loved Christmas Eve and wanted to make it special for families in this neighborhood,” said the late mayor’s son, Thomas M. Menino Jr. “Seeing kids’ faces light up when they’re handed a new toy brings us warm memories of our Dad and his enormous spirit. We’re proud to carry on this tradition and honor him this holiday season.”

With the support of the Mayor Thomas M. Menino Fund for Boston, Catholic Charities Boston, City of Boston Credit Union, and the Boston Police Department, the event was able to distribute toys, food, and clothing to hundreds of families impacted by the increased cost of groceries, gas, and basic needs items.

“There is nothing better than being able to give a child something meaningful that will allow them to have a happy Christmas,” said Joao DosSantos, Director of Catholic Charities Boston’s Teen Center at St. Peter’s. “It is a way of giving some happiness and peace to a family.”

The Catholic Charities Teen Center serves as a safe haven for close to 300 adolescents living in Dorchester’s most troubled areas during after school hours and throughout the summer months. The staff, programs, and activities aim to increase teens’ self-esteem while providing the tools needed for academic and personal growth, as well as their success in the community. To learn more or to support their work, visit ccab.org/teencenter.