‘Everyone I Meet is Someone I can Learn From’: Jemmina’s Story 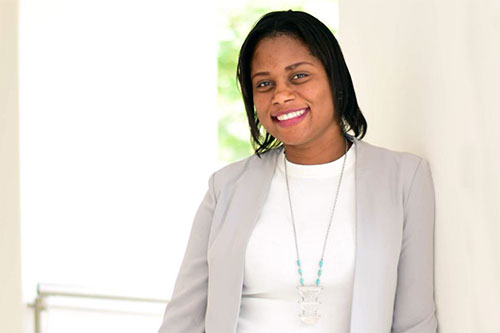 Part 3 of our Teacher Appreciation Series. We celebrate the positive and powerful impact Catholic Charities’ teachers have, in the classroom and beyond.

Jemmina Alcide doesn’t believe in waiting around for good luck.

Originally from Haiti, the 31-year-old first came to the United States in December 2020 to join her husband, who had immigrated to the U.S. from Haiti several years prior.

Alcide began the Adjustment of Status process and while waiting for her work permit, searched for English classes in the local area.

“I’m the type of person who likes to be busy and likes having something to do,” she said. “I was always busy back in Haiti.”

“When I got here, I could barely have a conversation in English with anyone,” she said. “The thing that helped me a lot is learning to not be afraid to talk to people in English.”

Alcide said the teachers she met through Catholic Charities helped her to conquer that fear, encouraging her to challenge herself in small ways every day. Within a week of taking classes, Alcide changed the settings on her phone to English. She watched movies with English speakers. She studied people’s lip movements to mimic how they pronounced challenging English words.

“Jemmina is just so determined,” he said. “She would make her way with or without Catholic charities, but we have helped point her in the right direction a lot quicker.” 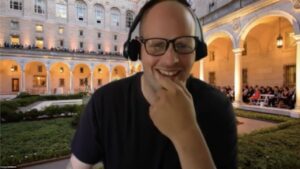 A born educator, McKibbens considers the craft of teaching to not only be about pointing students in the right direction but also, pointing their attention to the unique skills and strengths that will light their respective paths.

“The students I teach are remarkably skilled, talented people who often end up working very hard for low-wage jobs,” said McKibbens. “My goal is to empower these students by helping them enter the system, whether it be through job training or college.”

Having spent a decade teaching in both the U.S. and China, McKibbens said he knows firsthand just how overwhelming it can be to enter a foreign country. During his time abroad, McKibbens said he found that, beyond the language barrier, there are many deep-rooted cultural differences in the way people are taught to speak, write, and even think, depending on where they are from.

For example, McKibbens said people who speak East Asian languages are taught to put their thesis statement at the end of their essays, rather than the beginning, as American students are taught.

“Very often, the trickiest part of my role is not about helping students to learn English but helping them learn how to adapt to the different academic customs,” he said.

McKibbens’ attention to such details, and to the nuances of his role, demonstrate his lived passion for teaching and for Catholic Charities Boston’s mission of service.

During the pandemic, when classes were fully remote, McKibben and his colleagues asked their students to meet them at the Haitian Multi-Service Center, where they gave each student a new textbook and a bag packed with fresh food from the pantry.

“That’s just how George is,” said Alcide. “He’s always checking on you, asking: ‘What are you doing? How are you doing? Do you need help? Let me know.’ He’s a very supportive teacher.”

Just a couple weeks ago, George wrote a recommendation letter for Alcide, addressed to the University of Massachusetts, where she hopes to earn a master’s degree in accounting. Having studied accounting and business administration in Haiti, and currently working as a relational banker at Bank of America, Alcide feels confident about the path she is on. The future appears bright.

However, she is taking her journey one step at a time—capitalizing on every conversation she has, taking in every moment.

“Everyone I meet is someone who I can learn from,” she said. “Everything around me is a resource.”